History of The Bahá'í Faith

Throughout history, God has sent to humanity, according to the needs of the time, a series of Divine Educators, known as Manifestations of God, to reveal His will and purpose. Although we can never know the essence of God, through the Manifestations, we can discern His qualities and attributes.

These principles and laws, these firmly-established and mighty systems, have proceeded from one Source, and are the rays of one Light. That they differ one from another is to be attributed to the varying requirements of the ages in which they were promulgated.
– Bahá’u’lláh

There is one God; mankind is one; the foundations of religion are one. Let us worship Him, and give praise for all His great Prophets and Messengers who have manifested His brightness and glory.
– `Abdu’l-Bahá

Bahá’u’lláh, the most recent of these Divine Educators, teaches that humanity is on a path to maturity, much like an individual who progresses through various stages of development. The current turmoil in the world can be viewed as humanity experiencing the turbulence of adolescence. The writings of Bahá’u’lláh provide a wealth of spiritual teachings that assist us in progressing on this path towards maturity, and in building a peaceful and unified world. 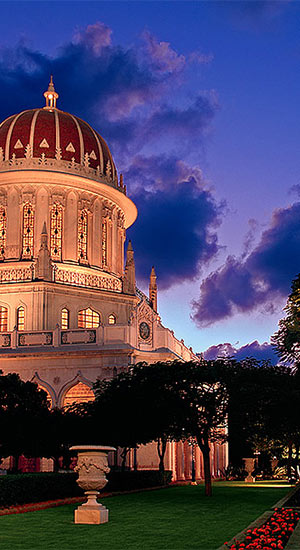 The resting place of the Báb forms the centrepiece of the gardens in Haifa. For Bahá’ís it is one of the holiest places on earth.

In 1844, at a time of widespread moral breakdown in Persia, present-day Iran, a young merchant from Shiraz took the title of ‘The Báb’, meaning ‘the Gate’ in Arabic. Calling for spiritual and moral reformation, He announced that He was the bearer of a message destined to transform the life of humanity. As the symbolic gate between past ages of prophecy and a new age of fulfilment for humanity, the Báb founded a distinct independent religion of His own. His revolutionary message of spiritual renewal attracted tens of thousands of followers who became known as Bábí’s.

However He was also the Herald of a new Revelation from God, with a role to prepare the way for the coming of a new Divine Educator, who would usher in the era of peace and justice promised by all religions. The religious authorities of the day, disturbed by the upheaval surrounding the Báb’s message, clamoured for His arrest and imprisonment. He was eventually tried and sentenced to death by firing squad in the town square of Tabriz on 9 July 1850. Twenty thousand of His followers were also killed in a series of brutal massacres throughout Persia. 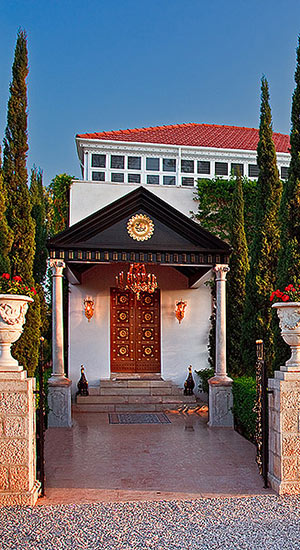 The resting place of Bahá’u’lláh in Bahji, Israel, regarded as the most holy place for Bahá'ís, and a place of pilgrimage.

Special video for the 200th Anniversary of the Birth of Baha’u’llah:

Bahá’u’lláh, whose title means the Glory of God, proclaimed to be the Promised One foretold by the Báb and prophesised by all the Divine Educators of the past.
Bahá’u’lláh was born in 1817 in Tehran, Iran. From a young age, He was renowned for His extraordinary wisdom, compassion, generosity and commitment to justice. As the son of a nobleman, He was offered a prestigious position in the Court of the Shah, but declined it in favour of a life dedicated to serving the poor, the vulnerable and the oppressed.

My object is none other than the betterment of the world and the tranquility of its peoples. – Bahá’u’lláh

In the mid-19th century, Bahá’u’lláh arose to proclaim a new Revelation from God. The thousands of letters and volumes of books He revealed, outline a framework for the development of a global civilization that encompasses both the spiritual and material aspects of human life.

These new teachings were met with vehement opposition from the clergy and ruling elite of the time, and Bahá’u’lláh was imprisoned, tortured and exiled for 40 years. Throughout all these hardships, He continued to proclaim His message of oneness and world unity.

During His incarceration, Bahá’u’lláh wrote to the Monarchs and Rulers of the day, including Queen Victoria. In His letters, He proclaimed the advent of a new Divine Revelation and exhorted the world leaders to uphold justice, abolish slavery and oppression, lay down their weapons of war and establish a lasting peace.

Bahá’u’lláh passed away in 1892, and although still a prisoner of the Ottoman Empire, His life and teachings continue to inspire millions of people around the globe to contribute to the betterment of their individual and collective lives.

The Roots of the Baha’i Faith: Part 1

The Roots of the Baha’i Faith: Part 2

BAHÁ’U’LLÁH'S COVENANT AFTER HIS PASSING

O ye that dwell on earth! The religion of God is for love and unity; make it not the cause of enmity or dissension…
– Bahá’u’lláh

In His writings, Bahá’u’lláh made clear provision for the Bahá’í community to ensure continuing guidance after His passing. This successorship started with ‘Abdu’l-Bahá, the son of Bahá’u’lláh, and then passed to Shoghi Effendi, the grandson of ‘Abdu’l-Bahá. Finally, the successorship concluded with the Universal House of Justice.

This continuing flow of guidance is referred to as the Covenant of Bahá’u’lláh. Bahá’ís accept the divine authority of the Báb and Bahá’u’lláh, as well as the appointed successors:

From earliest childhood, the eldest son of Bahá’u’lláh, `Abdu’l-Bahá, shared His father’s sufferings and banishments. Bahá’u’lláh appointed Him the one authorized interpreter of the Bahá’í teachings and as Head of the Faith after His own passing. ‘Abdu’l-Bahá became known as an ambassador of peace was seen as a perfect example of the Bahá’í way of life. His unconditional love, generosity and selfless service to humanity demonstrate Bahá’u’lláh’s teachings in action.

Appointed Guardian of the Bahá’í Faith by ‘Abdu’l-Bahá, His eldest grandson, Shoghi Effendi, spent 36 years systematically nurturing the development, deepening the understanding, and strengthening the unity of the Bahá’í community, as it increasingly grew to reflect the diversity of the entire human race. Shoghi Effendi translated the Bahá’í Scriptures into English, authored several books and wrote thousands of letters in response to questions from Bahá’ís around the world. 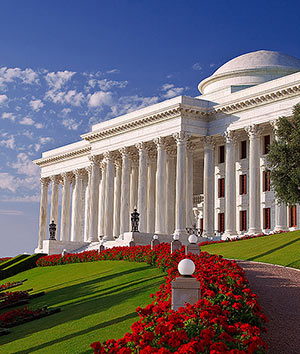 The Seat of the Universal House of Justice on Mount Carmel in Haifa, Israel.

THE UNIVERSAL HOUSE OF JUSTICE
(established 1963)

Want to learn more or discuss this information with a Baha'i?